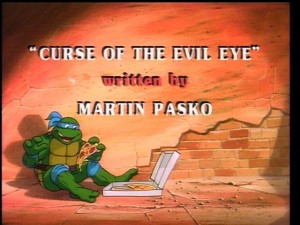 The Turtles, equipped with a new tracking device called a Zarnovameter, are on the trail of the Third (and last) Fragment of the Eye of Zarnov but, once again, Shredder locates it before they do. Now the villain has all Three Fragments and after fusing them together, attaches them to his helmet, where he is convinced that he can control its power.

The Turtles spy Baxter exiting a Chinese Take-Out Restaurant and follow him to a moth-balled freighter that’s docked in the harbor. Shredder unleashes the power of the Eye of Zarnov and wills an illustrated red dragon, painted on the side of the box of Chinese Take-Out, to attack the Turtles. Shredder is more than pleased with his new found power. The Turtles are frightened by the Red Dragon and back away as Donatello, unbeknownst to him, drops the Zarnovameter only to have it recovered by Baxter Stockman.

April, Vernon and a Channel Six News Team arrive on the scene to see Leonardo and Michaelangelo riding on the back of the Red Dragon as it flies high over the border. Blodgett, the Channel Six News Van Driver, panics and drives away.

Meanwhile, Donatello and Raphael are able to knock Shredder’s helmet off, causing the Red Dragon to disappear and Michaelangelo and Leonardo plummet into a nearby pool. Blodgett, returning to the dock, loses control of the van and jumps out as the van veers off the pier and into the harbor. Vernon fires him on the spot and Blodgett sheepishly walks away – but not empty handed – it seems that he has found Shredder’s helmet.

Back at his apartment, Blodgett, wearing Shredder’s helmet, laments about losing yet another job when he drops an inspirational tape into his Sony Walkman and wills himself a brand new limousine.

Back at the Turtles’ lair, Splinter instructs the TMNT to locate the Zarnovameter if they wish to find Shredder’s helmet. The boys, disguised as pizza deliverymen, hit the streets.

Baxter’s first foray into his lust for power is to create a Taj Mahal. This, of course, attracts the attention of the Turtles. Upon their arrival, Baxter creates a monster to turn the TMNT into “Turtle Soup.”

Meanwhile, Blodgett, determined to reclaim the helmet, discovers the discarded Zarnovameter and begin his search.

Back at the Taj Mahal, Shredder and Blodgett arrive to claim the helmet. Baxter tries to turn a golden minaret into a monster but is unsuccessful – it seems that the “Eye” has no affect on gold. Shredder is able to retrieve his helmet, trap the Turtles in a glass sphere and escape with both the “Eye” and the Zarnovameter.

Moments later, April and Splinter, who received an S.O.S. from the TMNT while they were engaged in mortal combat with Baxter’s monsters, arrive and release the Turtles. Donatello warns that Shredder is now a walking time bomb. It seems that the Zarnovameter was designed to destroy the “Eye” when the two came in contact and now it is reaching critical mass.

The Turtles, flying high over New York City, spy Shredder, foil his attack attempts and warn him of the danger. Shredder tosses the Zarnovameter into the Hudson just moments before a massive explosion. When the dust clears, Shredder is gone.