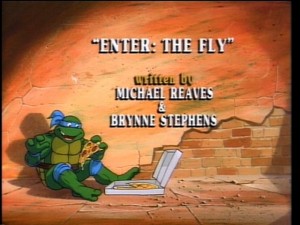 Failing once again to destroy the Turtles, Shredder contacts Krang and insists that he needs more help. Krang acquiesces and allows Rocksteady and Bebop to enter the Portal and return to Earth. However, Krang demands a “warm body” in exchange. Shredder willingly sends the unwilling Baxter. Unbeknownst to Shredder or Krang, a common housefly also enters the Portal and arrives in Dimension X. When Baxter is thrown into the Disintegrator Chamber, the fly follows, and they are ZAPPED by a large dose of energy. This burst causes Baxter and the fly to fuse their DNA together, creating a new entity. Baxter becomes The Fly and breaks out of the chamber, programs the Portal to return him to Earth and dives headfirst into the pulsating light.

Meanwhile, April has received a strange bouquet of flowers. Because there is no card, she is convinced that it was sent by the Turtles. She arrives at the Turtles’ lair and is greeted by Splinter. When he sees the plant, he grabs it out of her hands, throws it away and asks her if she has inhaled the fragrance. Moments after she says yes, she faints. When the Turtles arrive, Splinter explains that April has been sent a rare Far Eastern Doku plant and that its fragrance causes death. He can concoct the antidote, but he needs the leaf of a Gazai plant. The Turtles hurry above ground to a local nursery, specializing in rare and exotic plants, but along the way they are attacked by Baxter/Thy Fly who is hell bent on revenge. The TMNT escape the attack and head back into the sewers to continue their hunt for a Gazai plant.

The Fly decides that he must find Shredder and seek his revenge against him, but when he does, Shredder convinces Baxter that the Turtles are responsible for his condition rather than himself and sends Baxter/The Fly off to track down his “real” enemy.

Meanwhile, the Turtles locate the only Gazai plant in the Western Hemisphere, but lose it after a skirmish with Shredder, The Fly, Rocksteady and Bebop.

No sooner have the Turtles reported their failure to Splinter when Shredder invites them to meet on a “battlefield” and fight to the death for the Gazai plant. Even though the TMNT know Shredder has some “trick up his sleeve,” they agree.

A short time later, the Turtles arrive at a deserted auto salvage yard where the Shredder and Baxter have prepared a trap. Shredder’s plan is to herd the Turtles between two Electrode Posts that are designed to send anyone who passes through them a microsecond into the future, causing them to be out of sync with the rest of the world. However, his plan backfires when Splinter arrives on the scene to assist the Turtles. In the confusion, The Fly flies through the posts and disappears. Shredder, Rocksteady and Bebop use this opportunity to escape.

Back at the Turtles’ lair, Splinter prepares the antidote and administers it to April. Within moments she recovers.