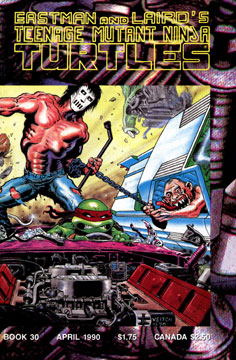 “Sky Highway”
The issue begins on an alternate dimension interstate populated by some truly bizarro freakazoid drivers, the kind of monsters that Big Daddy Roth had nightmares about. These road rashin’, gas guzzlin’, gear-shiftin’ grognards call themselves Mutato-Heads – and they’re out to wreak havoc on the Sky Highway… and any other road that they can find. After Quake-Butt and his cohorts, Diddy Wah Daddy, Rusty Dusty and Bone Ugly have created enough roadkill carnage in their own dimension, they head for greener pastures…

The TMNT and Casey have driven out to the wilds of Massachusetts to enjoy their lunch, but before they can chow down, they hear the rumble of motors and head off to investigate. Sure enough, the Mutato-Heads have arrived in our dimension and are looking to hotwire Casey’s ’57 Chevy! This doesn’t please Mr. Jones, so he and the Turtles haul feet down a mountain in the attempt to stop the heist… but they don’t make it in time. With no alternative, the Turtles and Casey climb into the vehicles the Mutato-Heads have left behind and a chase ensues… one that leads our heroes all the way back to the Mutato-Heads’ dimension!

The Turtles are more than a little surprised when they find themselves in an alternate reality populated by bizarro freakazoid drivers, but they’re on a mission to get Casey’s car back, so the guys set aside their shock and put the pedals to the metal in hot pursuit of the car theivin’ Mutato-Heads.

The guys get into all kinds of hot water, wrecking numerous vehicles and piloting new ones as they persue the bandits. Eventually everyone ends up in one car as they try to catch the thieves. Unfortunately they discover that there’s a bad side-effect to being in this dimension – it’s turning Casey into a Mutato-Head! Realizing that they have to get back to their own to save Casey, the guys make one last desperate attack to get the Chevy back.

The Turtles’ assault has unexpected results, however, as both the trashed vehicle the TMNT are in and Casey’s car go tumbling over the side of the Sky Highway – and like the name implies – there’s no ground to be seen for miles! As everyone freefalls into apparent obliveon, they suddenly warp out of the monstrous dimension and wind up in an empty parking lot back on Earth – safe and sound! Thankfully Casey has reverted back to his normal bizarro self.

The guys spot Casey’s car and run over to battle the Mutato-Heads… except they don’t find the monsters, they find four ordinary men! The one-time car thieves apologize for stealing Casey’s car and blame it on being mutated. Casey lets them off and sends them back to their beat up jalopy as he and the Turtles head for home in the ’57 Chevy.

The four men climb into what’s left of their car and drive off. As they discuss the jobs that they’ll be returning to, they discover something that they didn’t expect… they liked their lives better as Mutato-Heads! So the foursome heads back into the dimensional portal and return to the Sky Highway, to once again wreak havoc as Quake-Butt, Diddy Wah Daddy, Rusty Dusty and Bone Ugly!