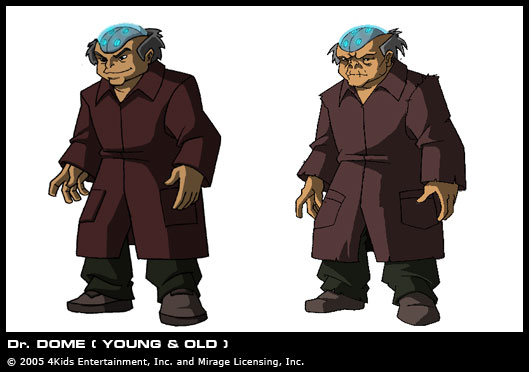 Dr. Dome was a member of the Justice Force. In both the original Mirage Comics and the 2003 cartoon, he left the team due to a squabble with Stainless Steel Steve over the love of their teammate, Battling Bernice.

Dr. Dome attempts to enact revenge on the Justice Force, having taken a heel turn since leaving the Force. He cites the quarrel with Steve over Bernice as his motivation. Dome is defeated by Ananda, the late Battling Bernice’s daughter, who lambasted Dr. Dome for his actions. Steve then gives Dome a second chance, allowing him to join them again.

Someone is kidnapping members of the Justice Force, and it is presumed that because of the presence of the Domeoids, that Dr. Dome is behind it. However, Dr. Dome arrives and thinks that Stainless Steel Steve was the perpetrator. In fact, the mastermind is Ananda, who is the late Battling Bernice’s daughter, who is also Dr. Dome’s estranged daughter and has inherited her father’s control over the Domeoids. The Justice Force and the Turtles defeat Ananda and Dr. Dome reconciles with her.