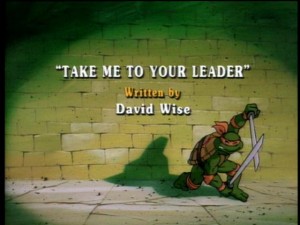 TAKE ME TO YOUR LEADER
Written by: David Wise
MWS Production #9059-014

SYNOPSIS:
After awaking from a nightmare in which he failed himself and his comrades in a battle against Shredder, Leonardo feels that he is unfit as a leader and, donning civilian clothes, decides to leave the lair and the Turtles.

Meanwhile, Shredder and Krang have left the Technodrome and are on the top floor of the Mile High Tower, executing Shredder’s new scheme for world domination. This time out, he has created a Solar Siphon. By aiming the device at the sun, Shredhead can effectively drain the sun’s “power energy” and store it in compact batteries while the Earth slowly goes into a deep freeze. Everyone will be too cold to resist him.

As Michaelangelo and Donatello (led by Raphael, their reluctant new leader) search for Leonardo, they notice a drastic change in the weather: it’s snowing in July! And, after a run-in with a polar bear, Raph decides that Donatello should be the new leader – after all, he “has all the answers” and a tracking device that will lead them to the source of the Solar Siphon.

Meanwhile, Leonardo walks aimlessly through the city, vacillating between worrying about his Turtle brothers and realizing that they are better off without him.

In another part of the city, Donatello’s tracking device leads them to a little red schoolhouse. Up in the bell tower, not only do they NOT find the Solar Siphon, but it turns out to be a decoy and a bomb with only ten seconds remaining until it goes off. Thanks to Donatello and Michaelangelo’s quick thinking, they are saved from a fate worse than death, but Donatello’s tracking device is detroyed. He rushes back to the Lair to get a spare, leaving Michaelangelo as the new leader.

Meanwhile, Leonardo comes to the realization that he has been selfish – he decides to return to Splinter and the Turtles and reassume his rightful place of leadership.

Elsewhere in the city, Michaelangelo and Raphael, having wandered around and finally admitting that they are lost, look up to the sky to see the sun’s energy being drained into the top of the Mile High Tower. After battling with a robotic sentry, they are joined by Leonardo and Donatello – the Fab Four are together again and proceed to the top of the building where they encounter Shredder, Krang, Rocksteady and Bebop.

The Turtles meet very little resistance, force Shredder and company to retreat, reverse the flow of the sun’s energy and save the world once again.