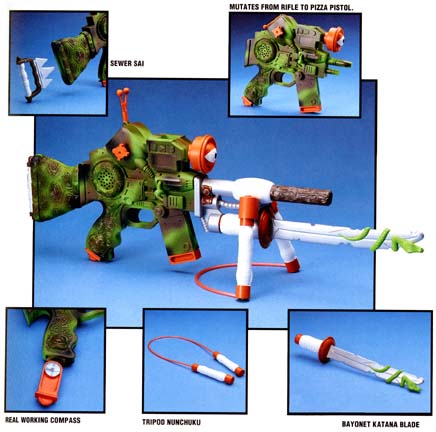 This reptilian Retromutagen Rifle lets you become a real Mutant one-man army against the Foot fiends! With its custom Turtle-textured grip and super-slimy telescopic Turtlescope, this green gun is actually 12 toys in one! Mounted on a detachable Ninja nunchuku tripod stand, this awesome Mutant Military weapon mutates from Retromutagen Rifle to Uzi-styled Turtle-powered pizza pistol. In a flash, military-issue detachable Ninja weapons pop out of semi-camouflaged hiding places. This reptilian rifle is jam-packed with Ninja extras – detachable sewer sai and kowabunga katana bayonet lead the pack, backed up by a bodacious bo barrel. Pizza ammo clip, Foot seekin’ antenna, terror-inflictin’ tossable Ninja star and working warrior compass round out the hi-tech Mutant Military design. The Foot Clan will clear a path when they hear the noxious noises ricocheting from this mad Mutant Military weapon. Hit the Turtilized trigger and watch the Foot Clan flee as the Retromutagen Rifle shoots out your favortie rude reptilian sounds. Hut two, three, four, reptilian rookie! If you survive the bodacious boot camp, you’ll be ready to execute super-secret Mutant Military missions with this wild weapon! Requires 2 “C” batteries (not included). For ages 4 and up.