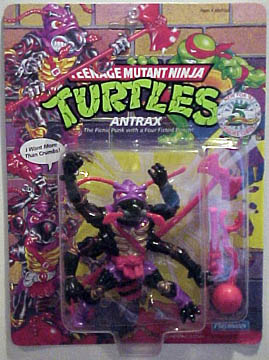 PORTRAIT OF ANTRAX
The Picnic Punk with a Four Fisted Punch!
VITAL ANTISTICS:
Accessories: Ante-up Axe with Nasty Noose, Beat ’em Back Bat, The Old Ball & Chain
Favorite Activity: Pizza Picnic Raids
Favorite Song: “Dead Ant, Dead Ant”…
Brain Weight: What brain?
Number of Arms: As if you didn’t know!
When Antrax comes marching in, heads will roll! He’s mean, he’s deadly – and worst of all, he’s quadridexterous! That means he has four arms (just count ’em)! This insidious insect used to be the only executioner in Dimension X. That was until yesterday, when Krang, on his annual scouting trip for Turtle tearing talent, spotted this top crop choice! Krang was impressed with Antrax’s skill with the ante-up axe and the beat ’em back bat. Krang offered Antrax money, power – even cable TV (with all the channels, of course). Antrax accepted and became Krang’s own judge, jury and Turtle executioner. Dimension X is now a tad nicer place to visit, but the Turtles are now more worried than ever. Besides his battling bites and unnatural devotion to Krang, this awesome-armed ant will turn any Turtle pizza picnic into a panic party.
© 1991 Playmates