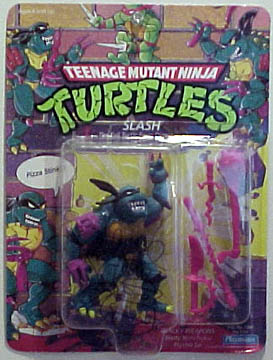 PORTRAIT OF SLASH
The Evil Turtle From Dimension X!
VITAL SLASHTISTICS:
Accessories: Nasty Nunchuku, Psyco Sai, Mutant Mace, Twisted Turtle Belt, Razor-spiked Gnarly Knife
Birthplace: Universe Number 9, Dimension X
Height: 6 ft. (from spike to spur)
Weight: 200 lbs. (with a heavy attitude problem)
Favortie Food: Anything but pizza
In an attempt to fight fire with fire, Shredder created the perfect Turtle terror – a ninja nemesis from Dimension X named – Slash. This snarling, snapping mutant menace is the total opposite of our beloved Turtle teens. He’s a crazed carnivorous cannibal who only eats tender Turtle tenderloin – even for breakfast!
This anti-Turtle teen slashes his way through the sewers on a maniacal mission of mass destruction. Armed with his Pyscho Sai and one good eye, Slash skewers anything that’s good and green. This mad monster hates everything the Turtles love: pizza, parties and pranks. Allied with Shredder, Slash won’t rest until he’s devoured our green Teens. His spiked knee and elbow pads and horned shell keep slash a cut above the rest.
©1990 Playmates Toys