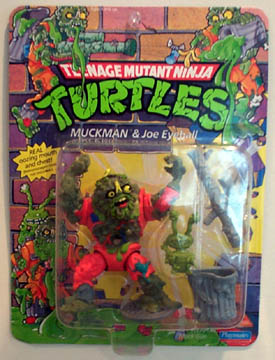 PORTRAIT OF MUCKMAN & Joe Eyeball
The Garbage-gathering Ghoul and His Parasitic Pal!
VITAL MUCKTISTICS:
Accessories: Removable Skullcap, Muck Gun and Muck Pack
Birthplace: Sewer City, U.S.A.
Height: Smells too bad to measure
Weight: See above
Favortie Movie: Wizard of Ooze
Favortie Musician: Oozie Osbourne
Favorite Treat: Sludge Fudge
Mutated with muck and transformed with trash, this fuming, former sewer worker oozes mysteriously through the city’s sewer system, searching for morsels of muck, sludge and slime.
The grungy garbage man tolerates the sewer-dwelling Turtles because they respect the dignity of the dark and the sanctity of the sewer. And the Turtles think Muckman’s cool because he looks like a pepperoni pizza.
Though Muckman stinks like a landfill, it doesn’t bother him. Don’t be fooled by the clothespin on his nose – that’s not to keep the smell out, that’s to keep the garbage in! But what does Muckman have besides a nose clogged with gunk? He’s got Joe Eyeball! The amazing three-eyeballed no-nosed parasitic pal who decon poses his way through sewer pipes and can see through the thickest sewer stench.
And be sure to keep his extra helping of Retromutagen Ooze (not included) handy, ’cause Muckman likes to keep his flesh fresh.
©1990 Playmates Toys