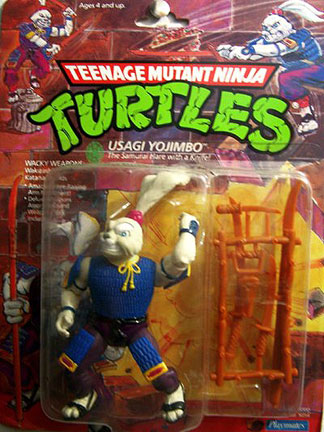 PORTRAIT OF USAGI YOJIMBO
The Samurai Hare with a Knife

Hundreds of years before sewers were even evented, Usagi Yojimbo (Rabbit Bodyguard), a skilled but masterless Samurai, wandered ancient legendary Japan. In a freakish burst of reception through Donatello’s trans-dimensional portal, this medieval hare wound up thrashing his way through the Turtles’ lair, kicking shell and more or less proving a few points with his Katana. Splinter recognized the ronin’s skills at once as Usagi repeatedly put the Turtles on the cutting edge. Trapped in Turtle-time, Usagi Yojimbo quickly became a trusted and honorable ally in the ongoing pursuit of pizza and a Shredder-less world.