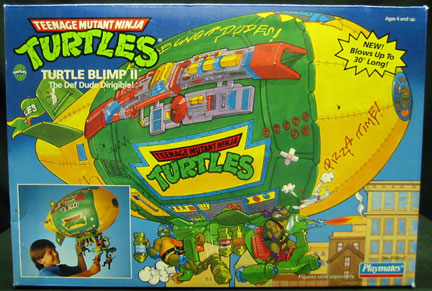 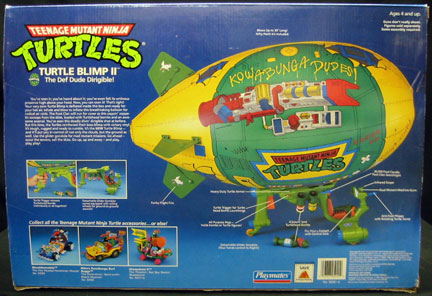 You’ve seen it; you’ve heard about it; you’ve even felt its ominous presence high above your head. Now you can own it! That’s right! Your very own Turtle Blimp is deflated inside this box and ready for your hot air. Inhale and blow to inflate this breathtaking balloon for radical air raids. The Foot Clan will run for cover as this zappin’ zeppelin swoops from the skies, loaded with Turtlehead bombs and an awesome arsenal. You’ve seen this deadly divin’ dirigible shot at before. But this time, the Turtles reinforced their boss blimp with victory vinyl. It’s tough, rugged and ready to rumble. It’s the NEW Turtle Blimp – and it’ll put you in control of not only the clouds, but the ground as well.Use the glider gondola for mad mutant missions. Go ahead – scour the sewers; sail the skies. Go up, up and away – and play, play, play!
© 1989 Playmates Toys