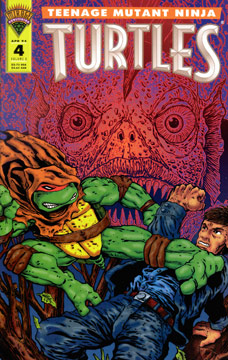 The killer robot is travelling underwater to avoid detection.
The Northampton area cop, now in plain clothes, is using a telescope to spy on Casey’s farmhouse from the local woods. Donatello shows up and kicks his butt, discovering that it’s the costumed vigilante, Nobody, in his civies. After stories are exchanged, Don invites Nobody to the house for some coffee.

Leonardo is exploring the sewers and discovers a female fish creature in a pool far below the surface. The creature surprises Leo and overpowers him easily, capturing the Turtle and sticking him to a wall of the area with some sort of goop. Leonardo manages to break free and falls into the water, where he finds a gigantic snapping turtle – which unfortunately is determined to make lunch of Leo! As he’s attacked, Leonardo manages to blind the beast in one eye and get clear of the water, but the monster gives chase. The ninja manages to collapse some rocks onto the behemoth. Thinking he’s defeated the giant, Leonardo heads off to tell Mike of his discovery, but as he rounds a corner, he meets the fishy she-creature once again.