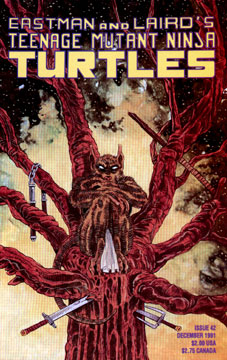 “Juliet’s Revenge”
April and Casey have been kidnapped, tied up, drugged with “truth serum” and are being questioned about their knowledge of the TMNT.

We’re then introduced to cryptozoologist Charlie Forte, who has been given a set of photographs that feature the Turtles and their unsual cast of friends and foes by a man in black – who looks exactly like Edgar Allen Poe. Forte is excited, as the photos prove the existence of creatures that he’s been ridiculed for studying (such as the Loch Ness Monster and Bigfoot).

Back at Casey’s farm, the Turtles are starving while waiting for Casey and April to return with food. Master Splinter is off in the woods fasting. The boys grow restless, as it’s been hours since they’ve seen their human friends. Leo becomes suspicious and orders the search for the missing April and Casey. In short order, they find Casey’s car, wrecked by the side of the road. Leonardo quickly determines that it was no accident that lead to the crash, and the Ninjas split up to find their quarry.

Raphael runs into Robert E. Howard, Michaelangelo is beset by Bruce Lee, Donatello is mesmerized by Mae West and Leonardo is confronted by the Renaissance artist, Leonardo. Each Turtle falls victim to their unusual adversary.

Master Splinter sits in a tree with Edgar Allen Poe, and tells the dead author that when the event of great importance occurs, he will go willingly. This brings a tear to Edgar’s face.

By this time, April and Casey find themselves back outside by their damaged vehicle. Casey is angry about the events that have occured, but he doesn’t know who was responsible. April finds his hockey mask and Jones spots the Turtles’ tracks. The two head off to find their friends and the people that abducted them.

Inside an isolated barn, we find that Forte has captured the Turtles and Master Splinter, and has them hanging by their ankles from the ceiling of the building. Soon a woman materializes, with Edgar in tow. The witch explains that she’s been working on a specific spell for hundreds of years – her speech angers Poe and he rushes her, only to be dissolved by a burst of energy. We soon learn that the woman is not a woman at all, but the demonic bride of Savanti Romero (the villain from TMNT #8), and she has come to seek retribution for the loss of her husband.

Savanti Juliet begins work on an intricate spell, while April and Casey sneak into the barn. Casey climbs the rafters and cuts his friends free, while April does her best to ruin the sorceress’ incantation. Once she’s been disturbed, Juliet summons forth a horde of goblins to battle our heroes. As the fight continues, Savanti continues her spell, culminating in a massive blast of light that destroys the roof of the barn and shoots into the heavens. Forte flees the fight, having lost not only his nerve, but his sanity as well.

Fortunately for our heroes, the blast has alarmed an angelic being, who arrives on the scene and dispatches Savanti Juliet, thus saving everyone’s life. The TMNT are stunned by her appearance, but even more shocking, we learn that she is Renet! The time apprentice has grown up and has assumed the mantle of Time mastery (among other skills). Renet tells the lads that she’ll always be looking out for them and then hurries off. Once Renet is gone, everyone gathers their wits and heads for home.

Two nights later, a young couple is sitting in the woods when they hear a noise. Forte, burned and raving from the battle, stumbles forward and scares the people off… who return home and file a Bigfoot sighting.