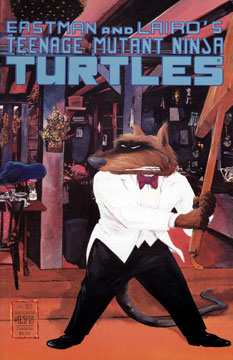 Dan Berger’s Note: Trying to write a synopsis of Mark Martin’s work is like trying to describe the flavor of a color. In other words, this summation of Mark’s comic falls woefully short of being an accurate representation of his crazed, artistic genius. Rest assured that you cannot fathom the complete tomfoolery of his stories without reading the actual comics.
Continued from TMNT #22!

As this issue opens, we find a disgruntled Dale sulking on a utopian Earth.

“How many stupid times to-stupid-day do I have to save the stupid planet?” she growls as she kicks a mushroom.

As the girl heads into The Forest (marked with a sign labeled, “Abandon Continuity All Who Enter Here”), she’s confronted by an angry, costumed rat calling himself The Fannywhacker. The rat demands to know why Dale isn’t in school and she points out that it’s Sunday, whereby the rat demands to know why she isn’t in Sunday School. The girl explains that it’s almost dark and Sunday School let out hours ago. An enraged Fannywhacker scribbles demerits on his clipboard before admitting that he’s not very good at his job… or anything else. The rat laments that all he wants to do is squash punks and read comic books, but the world is so perfect that there’s no crime to punish. As Fannywhacker exclaims that some grave cosmic error must have taken place, Dale decides that he’s the one person on Earth desperate (and crazy) enough to get into the quickly deteriorating time machine and try to undo what she had done in the previous issue. Armed with confidence in her companion’s instability, the girl hatches a plan…

Meanwhile, back at April’s apartment, the Turtles (still in their normal, pet shop turtle form) are stuck in an aquarium and are going stir crazy. The guys try to escape, but their efforts are futile.

Two million years in the past, the apeman is busy in his garden when the dilapidated time machine appears. The happy apeman is overjoyed, thinking that Dale has come back to visit him… but he’s rudely alerted to the arrival of The Fannywhacker when the rat greets him with a punch in the jaw. The costumed rodent then destroys the garden and the comfy recliner before launching the puppy into the air with a mighty toss. “Now that oughta incite the little goon!” Fannywhacker decress.

Monkeyboy runs off to save his dog but returns quickly, infuriated and wearing his Jocko mask. Fannywhacker rips the mask into tiny pieces and then runs off, apeman in hot pursuit. The Fannywhacker makes it back inside the time machine, leaving Homo Habilis outside, kicking the cube in frustration. The rat pops his head out of the vehicle and honks monkeyboy’s nose, and then launches the craft forward in time… leaving a very, very angry and very, very frustrated caveman in the past.

As Fannywhacker travels back to the future, he reverts to his true form, that of crimefighter The Gnatrat. Thus the plans of the Skwal are foiled, and humankind returns to its violent past (and present). Unfortunately for Gnatrat, as he tries to journey home, the time machine begins to come apart…

Back at April’s apartment, the Turtles have reverted back to their mutated forms… but are knocked senseless, as they were still inside the aguarium when the change took place.

In the sewers, Master Splinter is relaxing by playing a Speed Racer video game when he hears a knock at the door. The Sensei assumes that it must be the Shredder, so he loads a cannon and blasts a hole through the door. Unfortunately for Gnatrat, he was the one behind the door, and the giant projectile imbeds itself into the rodent detective’s chest.

As Splinter fetches Gnatty a shoe horn to pry the missile out of his torso, the crimefighter explains his predicament: thanks to Dale’s malfunctioing time machine, he’s now trapped seven years in his past. Splinter hatches a nutty plan to utilize Supperman and Gnatrat’s Vulcan mind-meld ability to get Gnatty back to his own time.

Meanwhile, the Turtles have decided to go out for pizza. The boys don their disguises and head out into the night.

Gnatrat (whose secret identiy is bazillionaire playboy Boo Swain), buys a restaurant for one million dollars. Gnatty and Splinter put out an “All U Can Eat” sign and wait for Supperman to arrive. As soon as the gluttonous hero sits down, the pair of rats begin to stuff him with tons of food. Supperman eats until he looks ready to explode, wherein Splinter and Gnatrat unveil the “koop da grass!” – a gigantic pizza! The Turtles show up just as the megapie is pulled from the oven and exclaim that they’ll take it. Gnatrat rudely tells the Turtles to beat it. Splinter tells Boo to cool it, as he knows the Turtles and they’ve had a bad day. Gnatrat continues to be rude and an argument breaks out between the two rodents. Gnatty screams that they’re wasting time and their plan will be ruined by the Turtles if they don’t hurry. Splinter sighs and then gives the pizza to the the TMNT. This action enrages Gnatrat and he attacks the Sensei. Splinter flips the charging Gnatty into the restaurant near the overstuffed Supperman. As the crimefighter stands up and prepares for battle, Supperman lets out an enormous belch, which rockets Gnatrat into the stratosphere, where he orbits the Earth with such incredible speed that he travels forward in time… thus landing back in his own time zone.

Next we find Dale in her room at home arguing with George. The alien is angry, but he leaves in his ship – and the Earth is saved from alien invasion. From downstairs, Dale’s mother yells at the girl for talking to strangers and reminds her that she has a test tomorrow.

“You’ve really got your work cut out for you, young lady!” Dale’s mom screams.

“…I know.” Dale states, as she dejectedly reads the newspaper, which is filled with violent headlines.