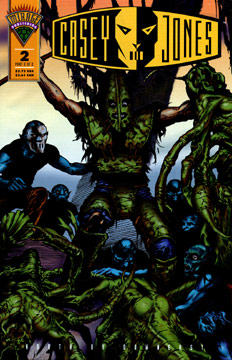 Gabby’s boat was almost swamped by a huge battleship. As the warship passed by, Casey spotted the freaky blue dudes aboard the craft. Shortly thereafter, dozens of other boats went zooming by in close pursuit. Gabby reasoned that the blue men had found the Royal Roe and were taking it to a safe place.

The perky captain then revealed that the Roe will break a spell that the blue men, known as the Malacostra, were under and allow them to revert back to their giant lobster forms – and there’d be no telling how much trouble they’d cause then. Casey doubted the story, but Gabby revealed a 10′ long lobster in her hold. Jones was convinced and the pair headed off to stop the Malacostra (and get Casey’s equipment back).

The blue men landed at an abandoned military island and lit a giant bonfire to begin their ceremony to call forth Big Snappuh – a mythic creature that would arrive and free them from the spell that they were under. Casey spotted one of the Malacostra wearing his stuff, so Jones used the carcass of the dead lobster to create some makeshft armor and went into battle with the horde of blue dudes. Gabby retreated to her boat.

Casey fought furiously with countless foes. As the intensity of the battle increased, the whole fortress suddenly exploded. Casey pulled himself from the rubble only to find that the spell had been broken with the explosion and the Malacostra were now back in their giant, mutated lobster form. The one wearing Casey’s armor explained that a deal had been made: Big Snappuh had agreed to break the spell forcing the Malacostra to be in humanoid form in exchange for the Royal Roe (precious eggs that will allow Snappuh to extend his bloodline). Explanations completed, the Malacostra attacked!

Casey went into a frenzy and defeated his foes, despite the seemingly hopeless odds. The last Malacostra to face Casey was the one wearing his mask, and Jones buried a hatchett deep into its head. Satisfied with his victory, Jones put his gear back on. At that point, a normal lobster crawled up to Casey and pinched his toe.

Just then Big Snappuh, a truly monstrous lobster of epic proportion, crashed into what remained of the island, sending Casey (and his pinching companion still connected to Jones’ toe) flying into the water. Jones found himself on the deck of the sunken battleship as Big Snappuh pulled it to the surface. Casey managed to arm some depth charges on board the warship and flee to safety before the bombs went off and cooked Big Snappuh. The blast knocked out Jones yet again, and he awoke on board Gabby’s boat, where the lobster that had pinched his toe delivered a note to him from the fiery captain to join her in the hot tub.

But Casey decided that he needed to eat before seeking fun and frolic with Gabby, so he cooked the toe-pinching lobster and began to eat it. Before he was finished, Gabby arrived – and was shocked that Jones had eaten the Royal Roe! In a fit of anger, Gabby changed into a giant lobster and explained that the lobster Jones had just eaten was the last hope of the Neptunian race to survive on planet Earth – and that the crustacean had been Gabby’s baby! Lobster-Gabby then attacked Casey.

Jones explains that he grabbed a cleaver and fought back, until everything went black.

The TMNT are impressed with Casey’s tale, but when they begin to press him for more details, they discover that Jones has already left. Disappointed, the mutant teens wonder if the story was true… when they find Gabby’s corn cob pipe that Casey had dropped.

The pipe had been cleaved in two.