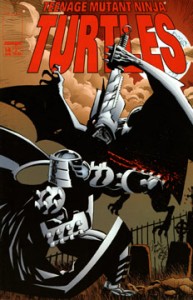 Raph, wearing Shredder’s armor, attacks the last of the mob hitmen. One begs for mercy and Raphael demands to know who ordered the attack. The thug explains that Big Tony ordered the assault and the ninja gives the man a five minute head start to warn the mafia boss that he’s on his way to finish the war. As Raph heads out, he’s surrounded by some Foot Soldiers, one of which states that Raph has no right to wear Shredder’s armor. The Turtle castigates the Foot Soldiers for hiding while their brothers were being killed by the mafia and tells them that they have no honor. Enraged, one Soldier attacks, but Raph easily dispatches him. The mutant then orders the remaining four to commit seppuku for their actions, and as they prepare to do so, they ask Raph to lead them instead. Much to his surprise, the Turtle agrees, and he and the four Foot Soldiers head off to face Big Tony.

In a park, a man is playing frisbee with his dog when it’s captured by the mutated Master Splinter in his bat form. Splinter carries the poor pooch up to a skyscraper and devours it.

In Arkansas, our heroes spot Deathwatch as he escapes in his rebuilt spaceship. Leo wants to chase the murderer, but the others tell him that the Cyborg needs help. Leo sneers and says the armor will heal itself and be fine, but the Cyborg states that the wound it received is too severe and the host body is dying – and then it tries to assimilate Mikey! Leonardo cuts the robotic link from his panicked brother as the Cyborg weakly begs for help. Suddenly, the symbiot named Lurch approaches the Cyborg and allows it to join with it, creating a new entity. The new being tells the Turtles that during their last battle, Deathwatch told it that Donatello was not dead. The entity’s new body is then wracked wth pain and flies off into the night. Vanguard teleports everyone up to his ship in attempt to save Don’s dying body.

Raph and the Foot Soldiers arrive at Big Tony’s mansion. Raph tells the mob boss that he’s decided not to kill him since both sides have lost so many men. It was time for the war to be over. Raphael then tells Tony to leave Shadow and Casey alone, since she is with her real family, the ones who have loved and cared for her her since she was born (unlike Tony’s son, who left Shadow’s mother while she was still pregnant). Big Tony reluctantly agrees to the truce, after Raph threatens to kill him and everyone he’s ever loved if he doesn’t leave them alone.

Elsewhere, Master Splinter dreams. Donatello contacts his sensei via the astral plane, begging his master to recover his senses and help the Turtle get back into his body. Just as Splinter begins to break through, he is awakened by a cop who hears him talking in his sleep. The mutated master flies off and spots Raph and the Foot. Splinter remembers that the Shredder is his enemy, and attacks Raphael. The Turtle calls off his followers, and removes his helmet to show his mutated sensei that he’s not Oroku Saki – but Splinter sees Raph as the “demon” that is haunting his sleep and attacks anyway, stabbing him with a trident!