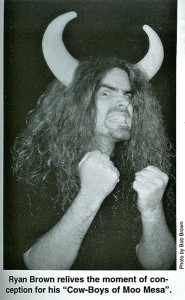 Ryan Brown (born May 2, 1962) is a comic book artist best known for his work on Teenage Mutant Ninja Turtles.

He is a 1980 graduate of Norwayne High School.

Brown began inking the Teenage Mutant Ninja Turtles in 1985 and continued until 1988, when he and partner Steve Lavigne began producing artwork for licensed TMNT products. Brown worked primarily as inker over Lavigne’s pencils.

Scratch and Farmer Michelangelo are un-credited on the back of the toy packaging, but Brown has confirmed at different convention appearances that he did create the cat burglar as well as designed Farmer Mike. He also notes that the stool pigeon included with the Scratch figure was created by long-time friend Dan Berger.

His character Motorhead appeared in an issue of Teenage Mutant Ninja Turtles Magazine.

Brown created his concept the Hallowieners in 1984. Mirage Studios published a comic book about the giant mutant monster Halloween hot dogs in 1989.

Brown was a participant in the drafting of the Creator’s Bill of Rights.

Brown also created the ABC Saturday morning animated television series Wild West C.O.W.-Boys of Moo Mesa, and helped with development on its corresponding video game for the arcade by Konami. The game itself easily compared to Konami’s own Western game Sunset Riders.