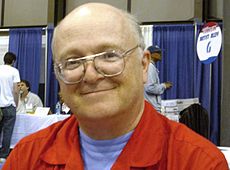 In May 1984, Laird and Kevin Eastman self-published the first black & white issue of Teenage Mutant Ninja Turtles, at an initial print run of 3000 copies for the forty-page oversized comic. It was largely funded by a loan from Eastman’s uncle, Quentin (which experience had a profund impact on Laird, and led indirectly to his later work with the Xeric Foundation), and published by the duos Mirage Studios, a name chosen because “there wasn’t an actual studio, only kitchen tables and couches with lap boards.” That first issue received a number of subsequent printings over the next few years, as the Turtles phenomenon began to take off.

Laird’s newspaper experience led to the duo creating “a four-page press kit,” that, according to Flaming Carrot-creator Bob Burden’s own Mystery Men press-kit included “a story outline and artwork that they sent to 180 TV and radio stations,” as well as both the Associated Press and United Press International. This led to widespread press coverage of both the TMNT property and Mirage Studios itself, creating “a demand for the interestingly-titled comic that caught everyone by surprise.” With the solicitation of their second issue, Eastman and Laird’s Turtles comic began a meteoric rise to success, bringing in advance orders of 15,000 copies – five times the initial print run of the first issue. This, Eastman has been quoted as saying: “basically ended up with us clearing a profit of two thousand dollars apiece. Which allowed us to write and draw stories full time: it was enough to pay the rent, pay the bills, and buy enough macaroni and cheese and pencils to live on.”

That the Teenage Mutant Ninja Turtles became such a success (and in such a short space of time) came as a surprise to both Eastman and Laird. Laird has stated on several occasions that:

“..start[ing] the Turtles.. was a goof; it was not anything we envisioned directing our lives in any way, shape, or form. It was like, “Hey, this looks like fun! Let’s self-publish it! Let’s see what happens!” …Suddenly, and just completely out of the blue, this Turtles phenomenon emerged. And really – from day one – just took over. It was a rapidly accelerating process which culminated in essentially taking over our lives. Completely.”

This led to increased pressures on the two creators (and the team which they formed to help them), including a prolonged period (about a year) of artist’s block in Laird. The “incredible growth and complexity of the business” that sprang up around their instantly-successful Turtles properties, led to Laird:

“suddenly discover[ing] to my horror that I no longer enjoyed drawing. It was a real shock, because if I ever had anything that I could rely on… it was that I loved to draw.”

Laird and Eastman’s creations went on to become a popular cultural phenomenon, forcing both of them to take regular sabbaticals from the comic to deal with the day to day pressures of running what became a multimedia franchise. Eastman eventually sold his share of the franchise to Laird (and the Mirage Group) on June 1, 2000, except for a small continuing income participation. On March 1, 2008, Laird and Mirage bought out the remaining rights and interest of Eastman, and the two went their completely separate ways. Laird believes that the reasoning was simply that Eastman “was just tired of it. He wanted to move on and has other things to spend more time on.”

On October 19, 2009, Laird sold the franchise to Viacom/Nickelodeon, but still retains the rights to do up 18 black-and-white TMNT comics per year. 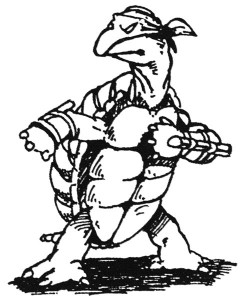