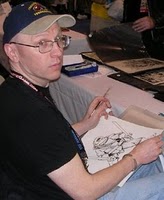 Berger began his career working on the TMNT Adventures series published by Archie Comics and officially began working on TMNT in August 1989. He also was responsible for the original NinjaTurtles.com website, which is where a good portion of content on this website came from. He is currently Managing Editor of Mirage Publishing and maintains The Mirage Group Website.

Berger also created the comic book series, Gutwallow and the TMNT character Merdude. He is a graduate of the Cleveland Institute of Art.