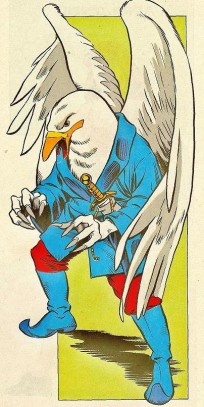 Weapon of Choice: Can Communicate with Animals, Sword

Occupation: Guardian of The Black Stone

Al’Falqua encountered the Turtles when they were travelling in Saoudi Arabia. They helped the giant Falcon protect the mysterious Black Stone, which was about to be stolen by Shredder and Verminator-X. Al’Falqa is noble and posesses a lot of wisdom of his city. He also has a smaller falcon called Talyn which is sort of his sidekick. Talyn and Al’Falqa can communicate with each other. He appears in the Teenage Mutant Ninja Turtles Adventures comics. He was created by Mirage Studios artist Jim Lawson.