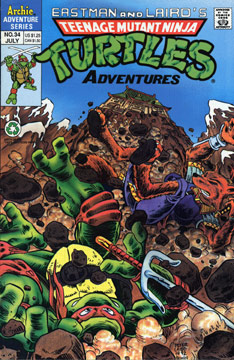 “The Search for the Charlie Llama”

Master Splinter, Ninjara and the TMNT have traveled the globe to visit the Sensei’s old teacher, Charlie Llama, in the Crystal Palace in Tibet. On their way they met a four armed tiger man named Katmandu who was on his way to the Palace to guard the Llama. Unfortunately, upon their arrival, our heroes find the palace in shambles – and a four armed skeleton escapes their grasp.

As Katmandu and Leo ponder where the skeleton may have gone, a young pregnant woman named Jang La explains that she has come to the palace in order that Charlie Llama (the fourteenth reincarnation of the Buddha) can serve as her midwife during the birth of her child. She also points out a distant palace among the mountains that the Dervish skeleton has escaped to.

Katmandu explains that this building is the home of the evil sorceror Mang-Thrasha. Typically, the wizard does not involve himself in the lives of men – so the tiger warrior is surprised that he has kidnapped Charlie Llama. As the protaganists decide what course of action to take against Mang-Thrasha, Jang La suddenly goes into labor. The TMNT take her back inside the Crystal Palace and make her as comfortable as possible. Soon, a group of monkey monks called the Tantric Monkeys arrive. Leo, Mike, Raph, Ninjara and Katmandu leave for Mang-Thrasha’s palace as Master Splinter, Don and the Tantric Monkeys help Jang La during her birthing.

The group of heroes arrive at the foot of the mountain holding the evil sorceror’s palace and soon run into a strange mist. Raph and Ninjara are separated from the others due to the fog. Mike, Leo and Katmandu are attacked by two dervishes. Meanwhile, Raph and Ninjara spot the palace and begin to climb towards it – when the mutant turtle loses his grip and causes an avalanche that carries both ninjas down the mountain.

Leo, Mike and Katmandu discover the four armed skeleton Dervish in the mist and Katmandu makes short work of the bone brain. The trio heads into Mang-Thrasha’s unlocked palace and find the wizard accompanied by a large Chinese militia. The sorceror states that he plans to ally himself with the Chinese (which enrages Katmandu) and hand Charlie Llama over to them. The Chinese government will then force Charlie Llama to tell his millions of followers that he is not the Buddha and that his spiritual claims were all lies, thus ending the any threat that the Chinese might lose control of Tibet.

Suddenly, Raph and Ninjara come crashing through the wall and a battle ensues. While the Turtles and fox fight the militia, Katmandu rushes to Charlie Llama’s side – but as he stands guard over his master, the Buddha dies comfortably on his bed, due to natural causes.

At that moment, Jang La has her baby, much to the delight of the Tantric Monkeys.

With the death of Charlie Llama, Mang-Thrasha’s plans are ruined.

That evening, Charlie Llama is burned upon a funeral pyre. Ninjara laments for Splinter that he has traveled all this way to speak with his mentor, only to lose him upon arrival. Splinter smiles and states that while the Master he knew is gone, he will return later, when the new incarnation of the Buddha (Jang La’s child) has grown up.