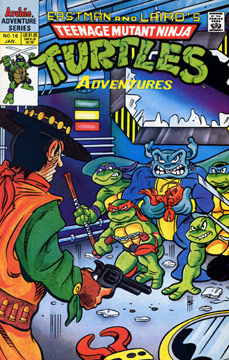 “DREADging the Ocean Blue”
Master Splinter is at home in the sewers of New York City, where he’s attemtping to contact the TMNT via astral projection.

Meanwhile, Mr. Null’s henchmen, the cowboy named The Kid, is searching the jungle inside a helicopter, trying to locate the Turtles and their allies. Our heroes manage to escape detection and reach their destination: the Atlantic Ocean. April asks how they’re going to cross the vast sea and the guys get to work building some rafts made from the debris found on the polluted beach (except Mikey, who takes the opportunity to do some surfing).

Once the rubber tube rafts are complete, Jagwar and Dreadmon bring fruit from the jungle so the TMNT and April will have food on their journey. Goodbyes are said and the heroes in a half shell set sail for America.

The group finds an island and decide to do some swimming and investigating. No sooner have the TMNT beached than they’re attacked by a strange submarine that’s equipped with robotic arms, which grabs the Green Team and April and stuffs them into its hull, carrying them off to an underwater headquarters.

Our heroes soon meet up with two other captives, Man Ray (aka Ray Fillet) and his diminutive buddy, a fishy dude from a species called Glublubs. Ray explains that he was swimming with some dolphins who were teahing him how to cope with his new body when he discovered the Glublubs. Unfortunately the fish folk’s coral reef home has been the site for toxic waste dumping. While Ray and the Glublub were viewing the radioactive waste, they both became sick and passed out, eventually waking up as prisoners. The Turtles decide that they’ll have to stop the illegal dumping and hatch a plan to escape. Ray uses his echo-location abilities to determine the thickness of the walls and discovers that the large mirror in the room is thin – which allows the Green Team to cannonball Mikey through the glass and create an escape route.

The TMNT find a group of men on the other side of the glass lead by The Kid – who tells the pirates (known as the Oceanauts) to capture the mutants alive. The Turtles have other ideas, however, and begin to kick Oceanaut butt. Ray runs down The Kid, who fires his pistol – the bullet narrowly misses Man Ray, but strikes the little Glublub in the chest, killing him. The murder enrages Ray, who starts to tear the ship apart. The Turtles try to calm Man Ray, but there’s no stopping him – so they find an access pool that allows them to escape into open water.

Later, Man Ray and the Turtles bury their fallen Glublub friend on the beach, just as a shooting star falls from the sky.