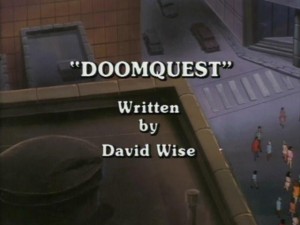 SYNOPSIS:
Once again, Dregg broadcasts his message to the citizens of Earth about the evil mutant Turtles and, once again, the Turtles are ticked off.
In fact, the TMNT are so ticked off that they mutate on the spot and, in broad daylight, attack a squad of TechnoGangsters, scaring the local citizenry. This of course confirms the citizens’ worst fears about the Turtles as promoted by Dregg.
Back at the lair, after the fight scene and the escape scene, the Turtles complain about their inability to control their mutations. Splinter suggests that it is because they are unable to control their “deepest rage” and that they may have to “sacrifice more than they can possibly imagine” in order to finally defeat Dregg.
Meanwhile in outer space onboard the Dreggnaught, an ALIEN SCOUT delivers the VORTEX CRYSTAL (which has the power to warp space itself) to Dregg. The alien crimelord is pleased, for with the power of this crystal, he will be able to bring his entire armada (which has been scattered across the galaxies) together and lay siege to planet Earth — that is until the Alien Scout informs him that there is another who seeks the Vortex Crystal – DOOMQUEST!
Dregg realizes that he must act quickly and perpetrates one last deception upon the Earthlings. But during the ceremony where Dregg “gifts” the Vortex Crystal to the Mayor as a source of unlimited clean energy, the sky darkens – Doomquest and his partner-in-crime, DRACONUS, have arrived and attempt to take possession of the Crystal.
Fortunately, the Turtles have been spying on the proceedings and manage to get to it first.
So while Doomquest captures Dregg, Draconus (aboard his Hover-Chariot) searches the City for the Crystal. April goes off to find a new mini-cam (hers was destroyed in the fire fight), the the Turtles and Carter attempt to analyze the “rock”.
Unfortunately for the Turtles, it doesn’t take long for Draconus to track them down and take possession of the Crystal. However, the one thing they were able to learn about it was that they were unable to mutate in its presence.
Back at Doomquest’s Ship, the Crystal is activated and within minutes, “Dimensional Rifts” are opening up all over the City and releasing ALIEN MONSTERS. It seems that Doomquest’s “quest” is to release his world (DARKREALM) which has been imprisoned in another dimension for centuries.
The TMNT decide that they must get that Crystal and close all the vortexes before it is too late for the Earth as well as themselves. It seems that their mutations are causing them to turn on each other, which is very counterproductive.
The Turtles arrive just as Dregg and Hi-Tech have escaped from their imprisonment and a battle royale ensues – everybody wants the Vortex Crystal. Carter manages to get it first with the help of the Turtles (who are willing to sacrifice the possibility of killing each other when they lose possession of the Crystal). The vortexes are closed and Doomquest is sucked back into the Darkrealm.
That still leaves Dregg to contend with, but he is finally “outgunned” and decides to leave Earth for good.
Meanwhile, April was able to get everything on video tape, broadcast it across the City and convince the humans that the TMNT are the real heroes.