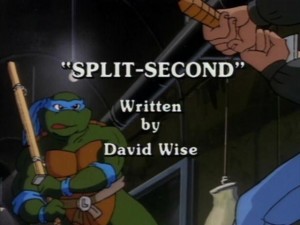 SYNOPSIS:
Carter, April and the Turtles investigate a break-in at the Antique Timepiece Museum. Convinced that Dregg is responsible, but not sure why, the Turtles discover a clue on a wall display of two rows of clocks. Above the top row are the letters “LT,” and above the bottom row are the letters “LL”. Donatello deduces that they are “Longitude” and “Latitude” and, after adding up the numbers on the clocks and checking a map, he announced the location – the NorthWest Steel Mill.
The heroes decide to investigate to see if it is one of Dregg’s traps. But it is not Dregg, instead they find a costume character named CHRONOS – Master of Time and King of the Clocktower. Chronos escapes but threatens the Turtles that he is planning on committing two crimes and challenges them to stop him.
Something about this guy seems familiar, so the Turtles separate into two teams to prevent both of Chronos crimes. April sets out to learn his identity.
Back at the lair, the Intruder Alarm sounds and Splinter unexpectedly finds himself at the mercy of Chronos.
Later, the Turtles and Carter reunite to compare notes. Only they happen to meet below the City Hall Clocktower which reminds them of a past adventure which leads them to the identity of Chronos. It seems his real name is Winston Fripp, and he was apprehended by the Turtles after he had robbed the City Treasurey. Apparently, the Turtles tied him up and left him in the Clocktower for the police. The clanking of the gears and the knelling of the bells drove him insane and he has vowed revenge against the Turtles ever since.
But Fripp/Chronos does not know about Carter or the Turtles new mutations, so Carter is able to learn the location of Master Splinter and rescue him.
Later, Dregg, who had supplied Chronos with his arsenal, pretends to have been responsible for the capture of Chronos and vows to continue protection the City from all criminals and the mutant Turtles!