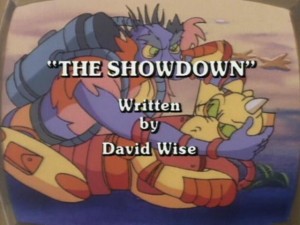 SYNOPSIS:
At Carter’s hideout, Michaelangelo and Carter hang out playing video games. However, today during a video game, the TV monitor goes screwy and Carter assumes that it’s just a malfunction.
Back at the lair, April contacts the other Turtles to inform them that all the TV stations in the City are jammed. Suddenly she is caught in the hypnotic effect of the spinning wheel pattern from her television set.
Carter runs into his old rival JET McCABE. Jet is a teenager who’s had a vendetta against Carter ever since Carter had him thrown out of a local martial arts club for cheating. Jet wants to settle the score but Carter can’t take the time – the Turtles need him.
Meanwhile, Dregg has contacted one of his minions SLEAZEBUG, who is presently recruiting able-bodied life forms all over the galaxy to participate in a martial arts tournament. If Sleazebug can get the TMNT for the tournament they will be transported clean across the galaxy and Dregg will not have them interefering with his plans.
Sleazebug catches up with the team just as Carter is about to confront Jet McCabe. Sleazebug zaps them instantly to the site of the tournament but he fails to get Donatello and Raphael who tear off in pursuit.
Michaelangelo, Leonardo, Carter and Jet find themselves in a holding cell on another planet. The martial arts tournament is at the compound of the sinister KARG. The rule here is “fight to the death”. Carter and Jet must set aside their differences and, with the two Turtles, face a fearsome variety of alien combatants.
Back on Earth, Donatello modifies the TechnoTracker based on his belief that Sleazebug’s vehicle left a trail of particle traces. Don wants to follow the particle remains so that he and Raphael can obtain the teleporter and rescue Carter and the other Turtles.
Meanwhile on the distant planet, a guard takes Leonardo and Michaelangelo to a teleporter in return for sparing his life. Jet elects to stay where he feels that he can be a champion.
Leonardo, Michaelangelo and Carter arrive back on Earth in time to help Donatello and Raphael destroy Dregg’s Mutation Machine and cause his latest base operations to blow sky high.