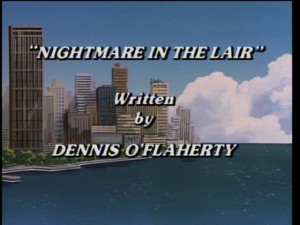 NIGHTMARE IN THE LAIR

SYNOPSIS:
Down in the sewers, while Michaelangelo, Leonardo, and Raphael are watching yet another cheesy sci-fi film, Donatello is busy building his lates invention — THE DREAM-O-VISION — a device designed to turn your “imagination” into a three-dimensional hologram.

After a couple of test runs it appears to malfunction when a “FREDDY KRUEGER-ESQUE” character named CREEPY EDDIE appears and announces that he is taking control of the dreams. Donatello shuts down the Dream-O-Vision helmet and decides that it is too dangerous and puts it away until he can figure out what is wrong.

Meanwhile, over at Channel Six News, Milton Frobish the Third, a nerd and son of the owner of Channel Six News, has been welcomed to the News Team and assigned to work with April. Thus begins a series of misadventures for poor Milton the nebbish, thanks to Vernon’s constant “sucking up.”

Back at the lair, Michaelangelo against Donatello’s orders, elects to test out the Dream-O-Vision. Everything is fine until he is attacked by the Squid Monster That Ate Hoboken. Unable to return to the real world, Creepy Eddie informs Michaelangelo that he has been waiting for someone from Michaelangelo’s universe to pass through. All he needs is one more person to make a two-for-one exchange.

Concerned about Michaelangelo’s reluctance to join them for pizza, Leonardo returns to the lair, only to be sucked into a whirlwind and transported into Nightmareland. Moments later, Creepy Eddie arrives in Reality.

Finally, April saves the say when she arrives at the lair and finding the lights turned off, turns them on — blowing a fuse in the process. This causes the Dream-O-Vision machine to shut itself off, causing Michaelangelo and Leonardo to return to Reality and Creepy Eddie to return to Nightmareland.