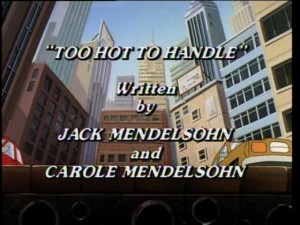 TOO HOT TO HANDLE

SYNOPSIS:
Donatello tells the other three Turtles that based on his calculations, the Earth has changed its orbit and is heading for the Sun. Mikey, Leo and Raph think that Don has been working too hard and force him to watch a movie with them. But when that movie turns out to be THE DAY THE EARTH COLLIDED WITH THE SUN, Donatello goes ballistic and says that he has to find a way to save the planet.

Meanwhile, Vernon’s genius nephew, Foster, is in town for his junior high school’s science fair. Vernon tries to impress the boy at Channel Six News, but like everyone else in Vernon’s universe, Foster sees through him like a sheet of glass.

Back at the lair, despite the fact that the termperataure is rising, no one believes Donatello when he tells them “that the sky is falling.”

Over at Channel Six, Vernon makes one last vain attempt to impress his nephew by pleading with April to ask the Turtles if they would meet Foster at the National Junior High Schol Science Fair Competition. The TMNT reluctantly agree and arrive to witness Foster’s invention — the SOLAR MAGNET.

Donatello was right! The Earth is orbiting closer to the sun and Foster is responsible! Foster says that he plans to leave it on until after he wins first prize.

Before you can say “Chicken Little,” Donatello destroys Foster’s invention. Not to worry though, Foster is a genius and he is able to put it back together in time for the competition.

Meanwhile, some how or another, the evil scientist, Professor Philo Sofo, learns of Foster’s Solar Magnet and steals it prior to Foster’s unveiling, to put his, as he says, “evil plan into action.”

Of course, everyone assumes that Donatello is responsible but he professes his innocence. In fact, he wishes that he had stolen it, because if it should fall into the wrong hands it could mean “the end of the world.”

Suddenly, the image of Professor Philo Sofo appears on the television screen and announces his evil plan. It seems that while he is safe inside his underground bunker, the rest of the world is about to become toast. Afterwards, when there is no one left alive, he will become the undisputed ruler of the planet.

With few clues to go on, and only twelve hours before the “end of the world as we know it,” the Turtles race over to Sofo University. Along the way, they pick up Vernon and Foster. The Turtles thank Foster for having a change of heart by agreeing to help them dismantle the Solar Magnet, but Foster informs them that he is merely along to meet his hero – Professor Sofo.

When they arrive at Sofo University — it is deserted and apparently has been for some time. Before they leave, they find an important clue that leads them back to the city and under the Central City Park.

With only minutes to spare, the Turtles, along with Foster, foil Professor Sofo’s evil plan, and destroy the Solar Magnet.