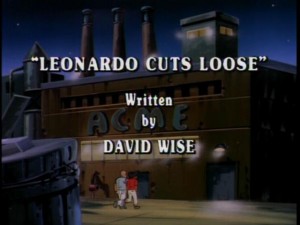 A series of baffling crimes are being committed by “brawny burglars” with thick Austrian/Schwarzeneggian accents and the Turtles are on the case. But so is Casey Jones and that could mean nothing but trouble for the Turtles. It seems that Casey Jones is just too much of a gung ho vigilate for the Turtles taste.

However, the Turtles are no match for the “muscle-bound miscreants.” They decide that they will have to fight fire with fire — by “pumping up.” With that no sooner said, then April calls them on their Turtle Com to tell them a crate was delivered to them at Channel Six — it is a weight lifting machine from Wally Airhead. The same Wally Airhead who owns the gym around town and is the employer of the “pumped-up” creeps who whipped their butts.

Back at the lair, Leonardo refuses to participate. He believes that honing his ninja skills will enable him to defeat their enemies. He leaves the Lair, leaving the remaining three Turtles to “just do it.”

Suddenly, the weight-lifting machine imprisons them and becomes mobile – delivering them to none other than Wally Airhead himself.

When Leonardo returns, he discovers that his brothers and the weight lifting machine are gone. Splinter suggests that he recruit Casey Jones in his effort to locate his missing brothers. Leonardo reluctantly complies.

Back at Wally Airhead’s “House of Pecs,” Wally is surprised to see only three Turtles rather than four. It seems that Wally is not just a weight lifter but a scientist as well — he has built a machine that emanates a ray that he calls “Strongium 90.” This machine provides Wally and his men with their strength. And it also seems that he wants to capture the “essence” of the Turtles” strength, bottle it and mass market it.

After Leonardo contacts Casey Jones, he convinces him to join Wally’s gym in an effort to find his missing brothers. With that done, Casey and the Turtles discover that Wally and his men are buillding “The Block Buster” a gigantic boxing glove that Wally plans to use to execute the “crime of the century.”

Meanwhile, Donatello has rewired the Strongium 90 machine so that Wally and his men will think that they are “pumped up” enough to commit their crime.

Wally takes his “block buster” out into the streets and makes his demands: either the City give him $500 million dollars in cash or he will demolish every building in the city, starting with the Supreme Court.

However, Donatello’s plan kicks in and Wally and his men revert back to the wimps they really are, allowing Casey and the Turtles to kick their butts with the greatest of ease.