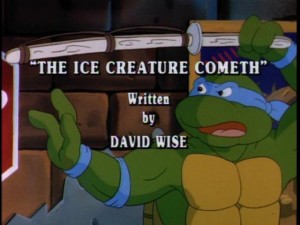 While the Turtles do battle with a refrigerator that has not been defrosted lately, Rocksteady and Bebop decide that they want to be the “top mutants” at the Technodrome and throw out a vat of mutagen onto the frozen tundra, creating a giant Ice Creature.

Bebop “pulls a thorn from the lion’s paw” and the Ice Creature follows Bebop’s orders. Shredder suggests that Bebop order the Ice Creature to dislodge the Technodrome — when that fails he decides that Bebop should take his new friend to The City and retrieve a new thermo explosive device being developed at a nearby Defense Base.

Rocksteady, Bebop and the Ice Creature arrive in The City and are greeted by the waiting Turtles. However, they are no match for the creature that Bebop calls “Frosty”.

While Rocksteady and Bebop take a break (they are busy building snowmen of The Shredder and Krang and then knocking them down) from searching for the thermo explosives, “Frosty” turns all the buldings into blocks of ice — including the Channel Six News Building where April, Irma, Vernon and Burne are busy preparing for the five o’clock news.

The Shredder arrives just as Rocksteady and Bebop locate the thermo explosives. They load them into the Transport Module and head back to the Technodrome, leaving a very lonely and angry Ice Creature behind.

Meanwhile, The Shredder is successful in his effort to dislodge the Technodrome with the thermo explosives. But no sooner is it free from the Artic’s frozen grasp, then the rocket ship crashes into the tundra, and the Ice Creature, now melting from the intense heat of the rocket ship, blocks the way of the Technodrome.

The Ice Creature melts and then freezes, thereby making the Technodrome a prisoner once again.