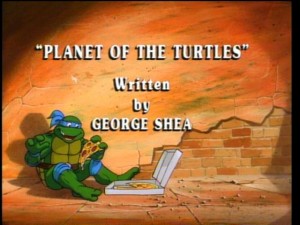 PLANET OF THE TURTLES

The Earth is experiencing some kind of atmospheric disturbance which is allowing the Turtles to view TV shows from other worlds. They are tuning into a wrestling match from Planet of the Turtles, where the “Flying Turtlenecker Brothers” defeat smaller opponents.

Dimension X is experiencing the same type of disturbance which is enabling Krang to watch the same show. On a commercial break, Krang sees Rupert, a turtle pitchman, selling a Personal Energy Projector. Krang thinks he can use this projector to draw energy from Earth to Power the Technodrome. He sends Shredder to the Planet of the Turtles to retrieve the projector. Shredder gets chased by Rupert and the Turtlenecker Brothers back through the portal to Dimension X as he tries to steal a projector. With the Turtlenecker Brothers stuck in Dimension X., Krang convinces them to go and capture the Turtles. He sends them to the sewers through a dimensional portal and they nab the Turtles, bringing them back to the Technodrome. April happens to be with the Turtles and radios Splinter as soon as they disappear. Splinter gets there just in time and he and April enter the portal just before it closes.

In the Technodrome, Krang has set up the projector and has drained almost all the energy from Earth. The Turtles realize they have to come up with a way to stop Krang. Splinter and April rescue them and they split up. Donatello and Rupert are sent to the Planet of the Turtles to look for Dr. Turtlestein, the inventor of the projector, to see if he knows of a way to stop it. Splinter, April and the rest of the Turtles stay in the Technodrome to try and stop Krang. Donatello and Rupert come back just in time with a portable transporter and reverse the effects of the projector, sending the energy back to Earth. Dr. Turtlestein uses the transporter to send the Turtles, Splinter and April back to Earth.