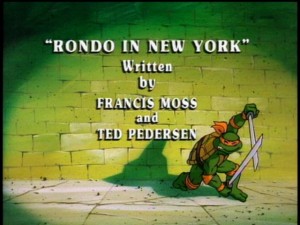 Shredder and the mutants are in town to steal a rare new mutagen created by Oswald Dren, grad student. Some mutagen is accidentally spilled onto a reel of movie film and monsters and a Rambo-like movie hero named Rondo come to life! The real Rondo is a wimp, and the Turtles try to help him confront the now-living monsters that stalk the street and the movie theater where the “Monster Movie Marathon” took place. Shredder and the mutants are thwarted in their attempts to steal the mutagen.