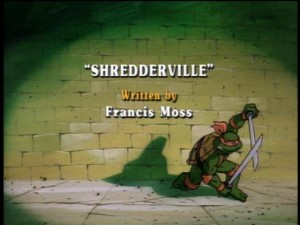 The Turtles are discouraged when Shredder gets away yet again, so they begin to think that the world would be better off if they weren’t around. They wake up and discover that they’ve gotten their wish: they are in a world where no one has heard of the Teenage Mutant Ninja Turtles! And worse, the city – now named “Shredderville” is in a sad state, and the Technodrome sits in the park! April and Irma are servants of Bebop and Rocksteady, and the glum citizens are brainwashed into hating mutants. They learn from Krang that Shredder is the real ruler… poor Krang is just a harassed bureaucrat who can’t even handle running the city! As the Turtles confront Shredder, the Technodrome blows up – and they wake up to find it was all a dream! Splinter smiles knowingly.