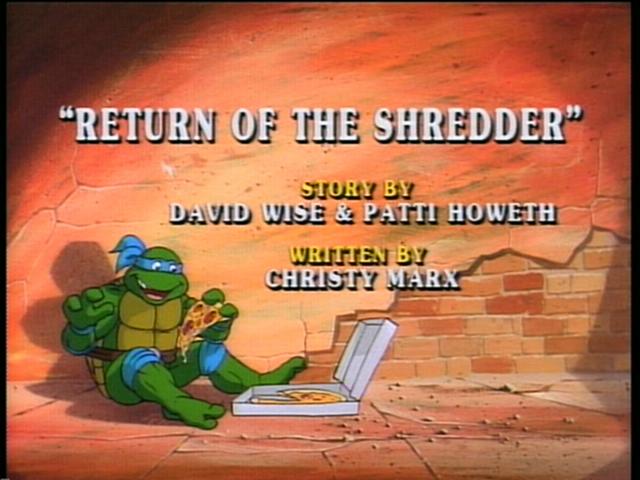 Having been banished to Dimension X, Shredder pleads with Krang to allow him to return to Earth and defeat the Turtles. Krang obliges him, but Shredder must defeat them without Krang’s help or his weaponry. Shredder agrees to demonstrate his worth.

Over at Channel Six News, Mr. Thompson orders April to get a story proving that the Turtles are a menace to society. April tries to convince him that the Turtles are heroes but he won’t hear of it, as long as the pretty Miss Tiffany is nearby to remind him how much she hates turtles.

Back on Earth, Shredder takes command of the Slash for Cash dojo and establishes the Crooked Ninja Turtle Gang. The Mock Turtles commit crimes all over the city, causing the local citizenry to believe that the real Turtles are indeed criminals rather than heroes.

Meanwhile, Shredder has broken Baxter Stockman out of an insane asylum and orders him to build the ultimate “rat catching” device. Dr. Stockman readily and enthusiastically agrees.

The Turtles return to the lair to discover that Master Splinter is missing and “something” has broken into their home. The TMNT follow a trail down through the sewers, in search of their Sensei, that leads them into an abandoned building somewhere in the South Bronx.

The Turtles encounter the four members of the Crooked Ninja Turtle Gang, dispatch them with ease, and learn that Shredder is waiting for them (with Splinter) at the Slash For Cash dojo. As usual, the Turtles defeat Shredder as well as Baxter Stockman and his Rat-Catching Machine, and rescue Splinter before the cops arrive.

Shredder retreats back to Central Park with Stockman and contacts Krang. Krang reminds Shredder that he has been beaten by the Turtles once again and that he will not get any help until he successfully defeats them.

Back at Channel Six News, April reports on the capture and arrest of the Crooked Ninja Turtle Gang, proving once and for all the TMNT’s are not a menace to society.