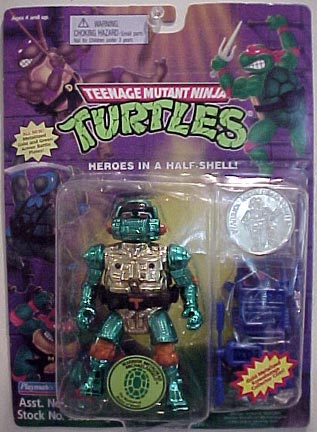 And so it came to pass that the world’s balance of power had shifted due to the displacement of the secret Mutant treasure – the Metallized Kowabunga Coins. Warrior Bebop and Warrior Rocksteady scattered the coins, knowing they would create a pro-Foot flux – and that’s just what happened. Allied with the Foot, Warrior Winged Leonardo and Warrior Winged Donatello transform from ultimate heroes to ultimate bad guys. These traitorous turncoat Turtles turn their traditional Ninja fightin’ skills against their own flesh ‘n’ blood, Warrior Metalhead Michaelangelo, who is the lone voice of truth. The inevitable battle will be fought with no holds barred, brother against brother. At stake is the fate of the free pizza-eatin’ world. It’s up to Warrior Metalhead Michaelangelo to reunite the Metallized Kowabunga Coins and restore the balance. Egads! It’s like pizza without pepperoni, dude! Don’t miss the battle, the ultimate metallic face-off. Will the evil power-starved Winged Turtles be able to power-pound Warrior Metalhead Michaelangelo? Or will Warrior Metalhead Mike, using his radical robochuks, portable party pack and radar/Foot blaster, overcome the odds and score a victory for truth, justice and a wedge o’ pepperoni pizza? The world awaits the outcome of this mega-metallized Mutant showdown!