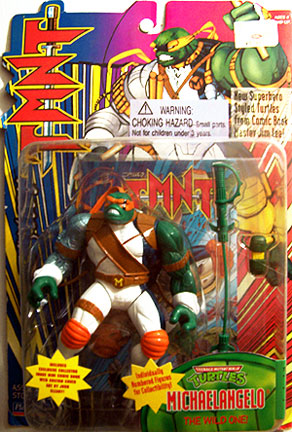 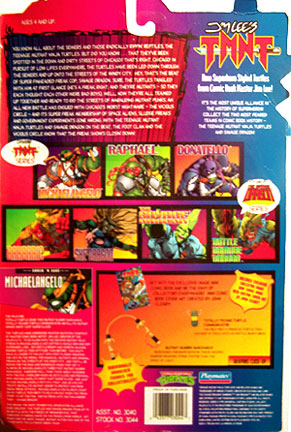 MICHAELANGELO
The Wild One!

The Turtles have undergone massive mutation, courtesy of master comic book artist Jim Lee, creator of the WildC.A.T.S. To go along with the massive mutant wild streak in Michaelangelo, he’s gotten a whole new bad boy superhero look. He’s battle-ready and sportin’ an even badder Turtle teen attitude than ever before! This nasty Ninja is loaded to the hilt with Foot floggin’ weapons, and he’s on the prowl for maniacal mutants and criminal freaks on the streets of the windy city. And they’ll be bookin’ for the badland boondocks when they get a glimpse of Michaelangelo’s turbo fast mutant numbin’ nunchakus. Shredder will think twice about scheming with the evil Overlord when he gets close and personal with Michaelangelo’s wrist cuff super slicer. And just in case Michaelangelo gets in a tight jam, he has his trusty metallite mutant armor to protect him from sneak freak attacks. Michaelangelo can always count on his Turtle teen bros to help him out when the freaks start to hit the fan. And no freak hits the fan harder than Savage Dragon!

This begins the most feared evil-eradicating alliance ever created! The Turtles and Savage Dragon team up to do battle with the forces of organized evil that threaten to wreak havoc on the peace-loving world. Get ready for the most savage, mutant action this side of the sewers with the ultimate Green Team!