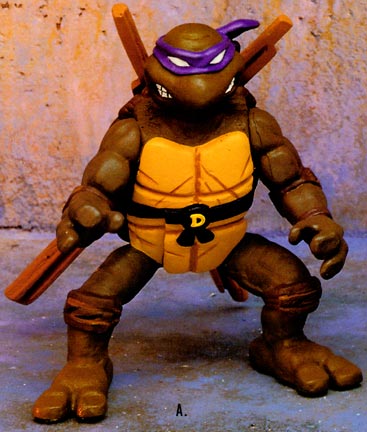 Maybe you’d thought that we’d already made all the good Turtles? No way, dude! These Ninja Action Turtles pack all the Ninja action a tiny Turtle-lover could want. These are the ultimate action figures. In fact, “action” is their middle name. The battle’s bound to get bodacious with Jump Attack Jujitsu Raph flippin’ into the fight and Cartwheelin’ Karate Don deliverin’ damaging kicks to the Foot. And with Battle Ready Boxer Mike leapin’ from his bodacious back while drawin’ his nunchukus, he’s just one nanosecond away from battle position! Somersaultin’ Samurai Leo swishes and spins 360 degrees for better Foot fightin’ force. Let’s just say these Green Guys put the Action into action figure!