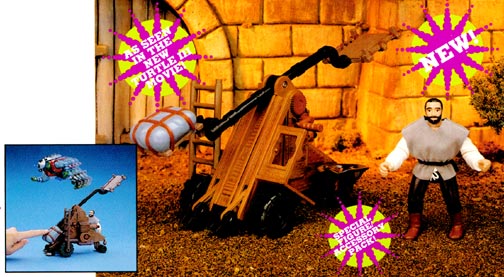 This two-faced team player stole his scenes on the big screen and now he’s here to steal the hearts of Turtle fans everywhere. Whether he’s cool Casey, the hockey mask wearin’, high stickin’ 20th century tough guy, or wily Whit, the 16th century warrior from the Turtle III movie with a heart of gold – this is one lean, mean, fighting machine – and just look at his equipment! It’s the dreaded Turtlepult,the secret weapon of 16th century Japan. Just load the Turtlepult up with Whit (or any other Green Teen figure) and send him flying through the air – to victory and beyond. That’s right, it’s a real Turtle tossin’ catapult! There’s no castle wall tall enough, no moat wide enough and no bad guy smart enough to stop the dreaded ‘n’ mighty Turtlepult!