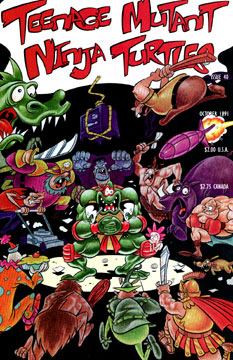 “Spaced Out!” Part 3
This story is continued from TMNT #39

The townspeople freak out when they see the alien-driven pick up truck approaching them at breakneck speed. Eventually the spacemen hit the brakes, sending Raph and the driver flying through the windshield and into a nearby comic shop. The aliens then vacate the vehicle and are quickly met by the sheriff. The armed visitor fires a shot at the lawman, but it bounces off of his badge and hits the photon pistol, destroying it and dazing the aliens. As they sit in a stupor, the space dudes are set upon by the locals.

Raph and the trucker are inside the comic shop, enjoying some mutant books. Raphael hears the aliens crying for help, and debates on whether or not he should bother. After a short inner debate, the Turtle heads out to lend a hand. Raph gives a long winded speech about how the people of Earth should welcome their visitors, and everyone falls asleep. This gives Raphael the opportunity to grab the space dudes and beat feet. While they’re running off, they spot the spaceship being carried off by a military helicopter… so the unlikely trio jump back into the pickup truck and set off in hot pursuit.

The chase leads Raph and his allies to a local military base, where the craft and the farmer’s clan are being held. The Turtle and aliens crash through a wall and demand fuel for their ship and “total domination of the Earth.” The frightened government officials agree to give them the fuel, but refuse to grant the aliens control of the planet… and the pair quickly erupt into tears… until on agent offers them Idaho. Thus the deal is done!

Happy with their conquest of Idaho and armed with a full tank of gas, the aliens take off in their ship, Raphael in tow. The spacemen teleport Raph back to his bedroom, and the Turtle gratefully prepares for a long sleep – until he’s immediateyl knocked on the head by Splinter’s cane, as the enraged Sensei screams at Raph to get his lazy butt out of bed and outside to milk Bessy.

Meanwhile, Bessy and the farmer’s bull enjoy a romantic sunrise.