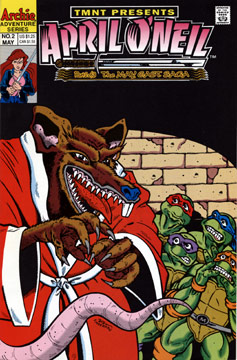 “The Battle for Splinter’s Brain”

April is having a difficult time with her life since running into May East – O’Neil is questioning everything that she’s doing and why she’s doing it. April finally decides that she’ll have to deal with her (ancient) past, and seek out May East.

In the sewers, the Turtles are training when a white ninja bolts into their lair and captures Master Splinter. April is pleased that she was able to impress her teachers, but the TMNT complain that they sensed that she presented no danger, which is why she slipped by them. Splinter is angry at his students for making lame excuses and they apologize to O’Neil – who in turn apologizes and declares that she thought everyone would be happy with her progress in ninjitsu. Splinter remarks that he is surprised by her skills, as she displays talent in the way of invisibility that far outreaches someone of her training. April worries that May East may have a hand in this…

Master Splinter pulls out a book entitled “Legends and Mysteries of the Orient” and explains that he’s been researching May East’s era. The Sensei tells April that all he’s been able to discover thus far is that East comes from a time when dark forces and magic were much more prominent than they are now. Leonardo suggests that they go see Bookwurm, as he may have some more tomes about the subject at hand. As the guys prepare to head out, a giant bubble arises from the sewer water, carrying none other than May East. East easily defeats the Turtles in battle and April prepares to attack – but East states that she has no desire to fight her own blood and uses a magic crystal to shrink herself and enter Splinter’s brain – who she promptly possesses.

The Turtles capture their ailing Sensei and tie him up. The group then heads further down into the sewers to seek Bookwurm’s help, with Splinter in tow. When they arrive in the sage’s lair, April balks at his appearance. The Turtles admonish her for (forgive me) judging a book by its cover, and April apologizes. Bookwurm explains that April’s close proximity to May East is corrupting her. The strange librarian then tells April that he has no powers to help them, that sorcery must fight sorcery. Thus April grabs May East’s crystal and uses its power to shrink herself and the TMNT and they enter Splinter’s head via his ear…