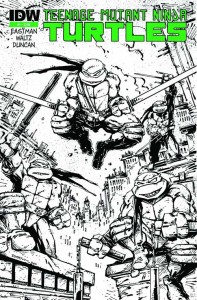 The heroes in a half-shell still know how to excite comic readers and retailers alike it appears, as IDW Publishing is heading back to press to offer third printings of both Teenage Mutant Ninja Turtles #1 (AUG118097, $3.99) and #2 (AUG118103, $3.99) in order to meet demand. The new printing of issue #1 is scheduled to go on sale November 2, while issue #2 will be released November 16.

“The response to the debut issue of the series has been phenomenal,” said Greg Goldstein, IDW’s chief operating officer. “We are grateful to all the old and new Turtles fans who are supporting this series so strongly, and will be delivering the second printing as soon as possible.”

“When I first started working on IDW’s Teenage Mutant Ninja Turtles with Kevin Eastman, Dan Duncan, and the rest of the IDW and Nickelodeon TMNT crew, I was excited and very optimistic about the possibilities. I mean, all the pieces were in place for a successful reboot,” said Waltz.  “But to have fans and retailers jump onboard in such huge numbers — and in such a positive fashion — has far exceeded even my own lofty expectations for our ongoing series.  It’s already been an exciting ride and I couldn’t be happier or more thankful.  And, knowing what we have lined up for future issues, I can honestly say the best is yet to come!”

This first Teenage Mutant Ninja Turtles series features new and exciting storylines that maintain the “turtle power” core beloved by millions of fans. Leonardo, Donatello, Michelangelo, and Raphael reunite to bring their ninja aptitude and teenage attitude to these action-packed adventures. The first arc tells the origin story of the Turtles and introduces a new villain, the fearsome mutant alley cat, Old Hob. 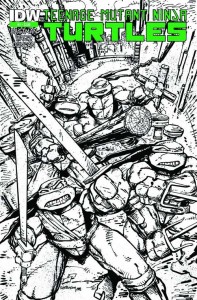