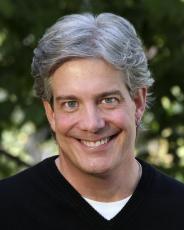 Townsend Coleman (born May 28, 1954) is the American voice actor forMichaelangelo in the 1987 animated series.

Townsend Coleman was a disc jockey for WGCL in Cleveland, Ohio in the late 1970s. This included the weekend of July 7–8, 1979, when that radio station presented his own take on American Top 40 upon the station’s refusal to air the “Top 40 Disco Songs” special for that weekend.

In the that same period, Coleman appeared in several plays through Jerry Leonard’s Heights Youth Theater ensemble. The plays were staged at Wiley Junior High School in University Heights, Ohio — just down the road from John Carroll University. Other famous performers who appeared in Jerry Leonard’s plays include actress Carol Kane.

Coleman’s career as a voice actor took off in the 1980s when, having recently moved to Los Angeles, he auditioned for the role of Corporal Capeman on Inspector Gadget. An addition to the aforementioned roles, he also portrayed Riot on Jem, Gobo in the animated version of Jim Henson’s Fraggle Rock, Scott Howard on the animated Teen Wolf, and many others. In TV commercials, he was the 7-Up “Spot,” Keebler Elves, and Raid Bugs. Coleman has also been the voice of NBC commercials for programs such as “Must See TV” and The Tonight Show since the early 1990s. Coleman has also provided the voice for Jason Whittaker on the Focus on the Family radio drama Adventures in Odyssey since 1994. He also voiced the Autobot Mini-Cassette Rewind on the Transformers cartoon series (1986) and provided the voice of ‘Colt’ in Saber Rider and the Star Sheriffs.

More recently, Townsend is the voice of Sentinel Prime in the Transformers Animated series. The character was designed to look like The Tick, as confirmed by the writers of the show at Botcon 2008. Townsend provided the voice for the title character of The Tick in the 1994 cartoon series.