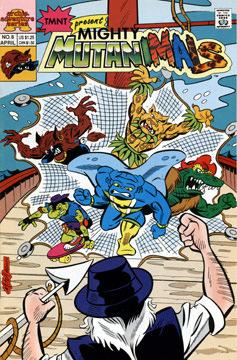 Juntarra bids farewell to her son, Jagwar, and leaves to complete the Path of the Four Winds with Kid Terra in tow. The Mutanimals spend time enjoying the tropical island lifestyle when Man Ray decides to go for a swim and discovers a whale entangled in a fishing net. Ray screams for the others to come and help him save her, but unfortunately the creature dies. Man Ray vows vengeance against those that caused her death and storms off into the jungle, where he rips a tree out of the ground in angry frustration. The rest of the gang arrives while Ray cools down and explains that the whale was a minke, a species that is still hunted. Man Ray declares that he’s going to put a stop to it and the others agree to help him.

The guys swim into a nearby port and Ray tells them that they’ll have to steal some motorboats if they hope to stop the whale hunters. Jagwar, Leatherhead and Dreadmon are very unhappy about the plan, as stealing is wrong – but Ray states that sometimes it’s okay to do something wrong if it’s for the greater good. Wingnut and Screwloose side with Man Ray and help him break into a boat supply store, where they find, and take, some high speed rafts. The group head down to the pier where they plan to wait for dawn to set sail and find their quarry, but Ray is impatient and pacing. Leatherhead tells his friend to take a swim as it will make him feel better, so the former scientist jumps into the sea – but raher than cooling him down, it only serves to to give Ray more time to dwell on things, which makes him more angry. The sun rises, Man Ray returns and the Mutanimals head out. Once at sea, Ray uses his telepathic powers to locate struggling whales and he soon finds a fishing boat, owned and operated by Cap’n Mossback, the pirate that Man Ray and the Turtles tangled with in TMNT Adventures #17. Ray and his friends attack and after a prolonged battle, the boat crashes into a reef and begins to sink. The men and Mutanimals escape in their rafts and the fight ends. Ray broods and feels bad about using violence as a solution and declares “Justice is a double-edged sword.”