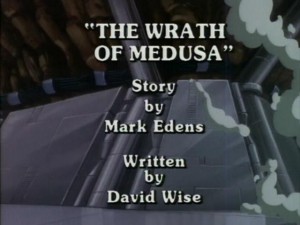 SYNOPSIS:
Believing that the Turtles are the only thing that stands between him and total domination of the planet, and unable to obtain him much needed Neutronium Ore, Dregg makes contact with an old ally: Medusa, a sinisterly beautiful alien. Dregg employees Medusa to eliminate the Turtles for him.
So while Medusa lures the Turtles into a fight at the hydroelectric plant, Hi-Tech successfully leads the Technogangsters back to the Neutronium mine, where they are free to continue their work.
Back at the plant, the mutant Carter nearly destroys the dam (which would have caused the loss of thousands of lives) and in the confusion, Medusa captures Leonardo. It seems that she intends to sell him and the other Turtles into slave labor in another part of the galaxy.
Carter, now back to his normal self, blames himself for Leonardo’s disappearance. He realizes he needs to spend more time training with Splinter to learn to control his mutation.
The Turtles accept Medusa’s “invitation” to meet her at the World Broadcast Tower to rescue Leonardo, only to find that they have been duped. During their battle the Turtles experience a full-blown mutation – which scares Medusa and she retreats.
Meanwhile, Dregg volunteers to repair the crippled SkySat Space Station, which has been orbiting the Earth powerless. Little do the Earthlings know that he intends to install his Stasis Relay System to fulfill his destiny to become the supreme ruler of the world!
Medusa steals Carter’s Virtual Reality Projector and uses it to lure Donatello, Raphael and Michaelangelo onto her ship. But by using the homing device built into the Turtles’ Turtlecoms, Carter is able to locate Medusa’s ship and rescue them. He sends Medusa (via her onboard teleporter) to the other side of the galaxy and foils Dregg’s master plan.
Unfortunately, the Turtles are being blamed for the destruction of the SkySat Station and Dregg is still considered a hero.