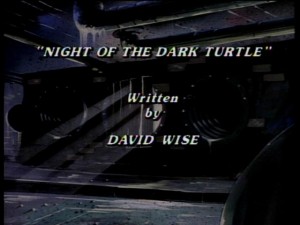 Synopsis:
While Donatello and the other three Turtles debate the issue of “brains vs. brawn”, Donatello’s Early Detection system sounds its alarm. According to Donatello’s readings, The City has experienced a major vibration emanating from the Earth. Naturally, everyone suspects Shredder and Krang, so they set out to investigate immediately.

Donatello’s readings lead them to a Government Research Lab, where only moments ago Shredder received a Micro Blaster from one of the resident scientists. The Blaster is supposedly the mightiest (and smallest) weapon known to man.

During a fight scene, Donatello is seriously hurt by Shredder. And while Shredder eludes the Security Guards (without his Micro Blaster), the Turtles also retreat back to the lair with a semi-conscious Donatello.

When Don emerges from his coma he is not quite the same. Something about him is different. But one thing is for sure, he is angry and wants Shredder so bad he can taste it. But Donny feels that he needs a new identity… something that will instill fear in Shredder’s heart, something like the Dark Turtle, a Batman-esque crime fighter.

Meanwhile, three Star Cruisers loaded with Triceratons have landed in the city, claiming the earth as Triceraton property.

Donatello/Dark Turtle scours the mean streets of the City in search of the Shredder, who is now in cahoots with a local mobster by the name of Wolf Jackson. Leo, Mike and Raph battle the Triceratons, who are intent upon sending the Earth through their Star Gate and back to the Tricertraon Galaxy where it will be stripped clean.

Leonardo, Michaelanglo and Raphael are helpless without Donatello and his brains. The 3 decide that they have to find Don and bring him to his senses, with only one hour remaining before the end of the world as we know it.

Back to where it all started, Donatello/The Dark Turtle and Shredder are engaged in a final showdown and it looks as if Donatello has the upper hand. In fact, it appears that Donatello really will kill Shredder once and for all!

But Leonardo, Raphael and Michaelagelo arrive just in time to save Shredder’s life and cause Donatello to fall and knock himself unconscious again.

When Donatello regains consciousness he cannot remember anything and is embarrased to find himself wearing a comic book character costume.

Meanwhile, time is running out for planet Earth, but thanks to Donatello’s quick thinking, he is able to convince the Triceratons that the Dark Turtle is the ruler of Earth and that the animatronic dinosaurs from the Natural History Museum are his minions.

Of course, Donatello’s use of Shredder’s Micro Blaster also helped to convince the Triceratons that they should get out…