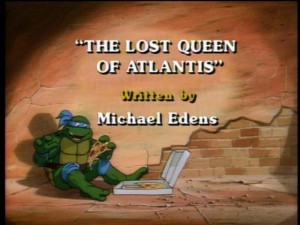 The Lost Queen of Atlantis

As April, Irma and Vernon visit Athens, April receives a present of a strange necklace. She begins to go into trances, during which she acts like an imperious queen! Just then, Shredder along with Rocksteady and Bebop, who have been persuaded by Krang to search for a valuable energy source, arrive and find that the necklace is the power source that they need!
The Turtles, who are in Greece sightseeing, arrive along with the members of a local Atlantis cult. A three way battle for possession of the necklace ensues. The cultists are also after April, whom the wannabe-Atlanteans see as the reincarnation of their lost queen.

The Turtles rescue April and then set off to track down the origin of the medallion, leaving her behind. The TMNT and Shredder arrive in time to see April being crowned queen by the Atlantean worshippers.

A cross-country pursuit leads to the shores of the Aegean, where April uses the powers of the medallion to bid Atlantis to rise from the sea — which it does!

Just in time, Donatello smashes the medallion, and Atlantis sinks again beneath the waves. Whacky.