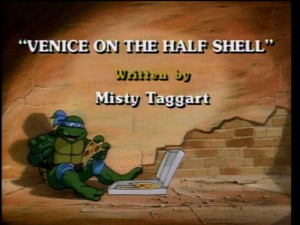 Venice On The Half-Shell

Krang decides to use a Hydrofluxer device to threaten to flood Venice, holding it for ransom. The Turtles, in Venice, run into Shredder as he’s portaled into a Venetian sewer. There’s a battle, and Shredder escapes. The Turtles run into April and Irma, who are covering the Venice Regatta. Meanwhile, Krang sends down Bebop and Rocksteady with instructions for assembly of the Hydrofluxer, which he’s sending in pieces. When the two mutants arrive, they run into April and Irma and terrorize them. When the Turtles come to the rescue, Rocksteady and Bebop escape, but drop the Hydrofluxer instructions. Donatello figures out from them what Shredder and Krang have planned, and the Turtles intercept Krang’s transmission of the most vital piece of the Hydrofluxer.

When an impatient Shredder turns on the device, it goes out-of control, and brings all sorts of stone gargoyles to life. The Turtles rescue Irma and April from a stone griffon, but the Hydrofluxer is also causing a huge tidal wave to form which threatens to flood the city.
Shredder grabs April, holding her in exchange for the missing Hydrofluxer part. Donatello gives it to him – but when Shredder turns it on, the tidal wave subsides, the monsters return to their stone selves, and Venice is saved! Donatello modified the part to reverse the Hydrofluxer’s effects.