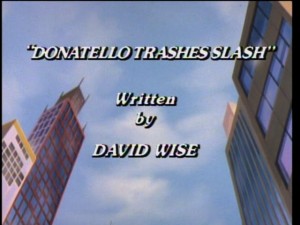 Donatello goes down to Channel Six News to give Vernon a piece of his mind after he had made disparaging comments about Turtles on live TV. On his way, Don runs into Slash, the evil turtle from Dimension X. This time Slash is smarter, stronger and has more technologically advanced weaponry… so he starts kicking Donatello’s butt.

For some reason, Slash intends to be the supreme turtle in this town. After dispatching Donatello, Slash sets off in search for the other three TMNT. But first he wants to go to Channel Six to get some equipment he will need to complete his “Trans-Frequency Fluxorlator.”

After contacting Donatello on the TurtleCom and rescuing him from under a pile of steel girders, Raphael, Leonardo and Michaelangelo have a good laugh when they learn that this was Slash’s doing. They remember him to be as thick as a brick and as dumb as mud.

But the skeptical Turtles are finally convinced when they track Slash down at the Channel Six News Building and the nasty mutant turtle delightfully tells them the story of how he became the genius that he is now. It seems that while he was drifting through space he happened to crash land on an alien world inhabited by a race of hyper-intelligent beings. They took pity on his sub-par IQ and increased his intelligence beyond the wildest dream of mere mortals.

From that moment on he was a turtle with a mission – to return to Earth and become the supreme turtle and “turtleize” the entire planet by using his Animalizer Ray and turning every human being into a turtle.

To prove that he is “as serious as a heart attack” Slash demonstrates the Animalizer Ray on Vernon and Burne, and presto, they become turtles!
After putting the Turtles “on ice” Slash climbs to the roof of Channel Six to prepare his entrance into the world domination. Before he can utilize the new Channel Six High Frequency antenna, the Turtles foil him. After a minor skirmish high above the city streets, Slash falls and is impacted into pavement. When the Turtles revive him, he is his old dumb self.