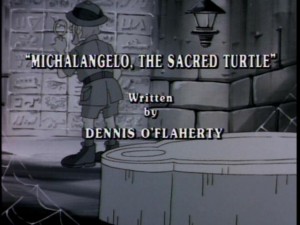 No sooner is the sarcophogus opened, when the lights go out. The ghost of Osiris is revealed and a precious ruby, the Turtle’s Eye, is stolen from the tomb — along with April.

While Michaelangelo unsuccessfully tries to contact the other Turtles, April is delivered to Sir Percival’s home, which is a replica of the Sphinx on the site of the old World’s Fair. Here Percival details his plan to harness the power of O’Malley’s Coment with the Turtle’s Eye Ruby. He plans to use the gem as a ray magnifier, which he will use to “rule the world” and make April his queen.

Back at the Museum, Michaelangelo is accused of being the thief until his true Turtle identity is revealed. The people think that Mikey is the spirit of Ahmed Turt-el, the sacred Turtle. All bow before him.

Back at the Museum, Michaelangelo dons the clothes of Ahmed Turt-el and leads his followers to Sir Percival’s Sphinx only to find themselves trapped in a chamber with closing walls. They escape with only moments to spare and team up with the other Turtles who have come to April’s rescue.

Meanwhile, inside the Sphinx, Sir Percival has locked his ray onto O’Malley’s comet. What Sir Percival does not know is that the Turtle’s Eye will not give him incredible power but will only cause the comet to crash to Earth.

While Raphael, Michaelangelo and his followers do battle with Casbah and other followers of Sir Percival, Donatello and Leonardo escape and rush to the Planetarium via the Turtle Blimp.

At the Planetarium, Donatello and Leonardo divert the path of the Comet, thereby saving the world from certain destruction.