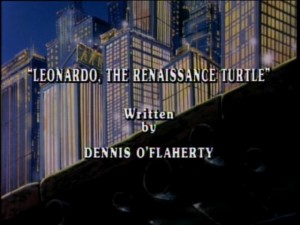 The City Mayor announces an end to crime when he introduces Professor Mindbender and his latest invention: LEX, a robotic police officer.

In no time, LEX rids the streets of crime. So much so, that the Turtles decide to take a vacation and leave The City, all save for Leonardo who fears that there may be some things that LEX can not handle.

Now with all the major criminals behind bars, Professor Mindbender makes some adjustments to LEX so that he can now pursue small time petty criminals. And his first arrest is of Leonardo and April — their crime: jaywalking! However, when LEX is called away for another arrest, April and Leonardo take flight and become wanted fugitives.

Back at the Turtles’ Lair, Leonardo unsuccessfully attempts to contact the other Turtles. But he finds a piece of Donatello’s equipment that gives him an idea: find REX-1, their old friend the robotic cop.

However, REX-1 is malfunctioning and can not remember who he is. Thanks to April’s old news reports, REX-1 is back up to speed. And just in time — because LEX has arrived to arrest them all.

REX-1 attempts to protect his old friends but LEX zap him with a ray that deprograms and reprograms REX-1 to follow his orders. REX-1 attacks Leonardo and April who barely make good their escape.

Meanwhile, the other Turtles, after getting Leonardo’s message, return to The City to find Professor Mindbender in charge and the populace in a panic.

By the time they find Leonardo and April, everything is under control — it seems that LEX turned on his inventor when he arrested Professor Mindbender for having scuffed shoes.