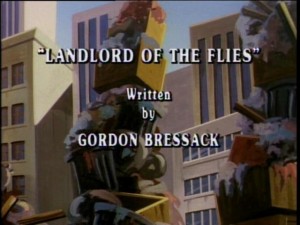 LANDLORD OF THE FLIES

Baxter Stockman returns as the “Landlord of the Flies” — and with him, an army of flies. The City is infested with swarms of flies in Baxter’s effort to seek revenge on the man who turned him into a fly in the first place — The Shredder!

Baxter follows Rocksteady and Bebop back to the frozen tundra where the Technodrome is “landlocked.” But Baxter’s plan goes awry when The Shredder freezes Baxter and his flies. Before he can administer the coup de grace, Krang sees some potential in Baxter’s demented plan. He offers Baxter the opportunity to revert back to his former self if he uses his flies to cripple The City and help capture the Turtles. Baxter agrees.

Back in the city, the Turtles learn the identity of the Landlord of the Flies and hit the streets to stop him. The TMNT have no trouble capturing him, but they’re thwarted by Rocksteady and Bebop who decide to help Baxter so that maybe The Shredder will turn them back into humans as well.

The Turtles are able to turn the tables on Rocksteady and Bebop, but Baxter and his flies escape, leading the Turtles, April and Vernon to a nearby empty baseball stadium. Baxter then traps the Turtles in flyupaper and awaits the arrival of the Shredder. However, the Shredder reneges on his deal.

Meanwihile, Vermon and April are videotaping everything from the organist box. Vernon accidentally leans against the keyboard, causing the stadium to fill with the sound of music. The flies become lucid — Baxter no longer has control over them. The Turtles are now free to kick some butt.

The Shredder, Rocksteady and Bebop barely escape as Donatello zaps Baxter into another dimension with his “Portable Portal Generator”.